“I am honored to visit this synagogue and learn about Jewish life in Poland before the cataclysm of the Holocaust. I am especially impressed to see the staying power of Jewish tradition and the rebirth of Jewish life. Coming at the end of a deeply moving visit to the Nazi death camp, I leave Auschwitz saddened but also with … hope, determination to build this world of equality, human dignity and peace.” 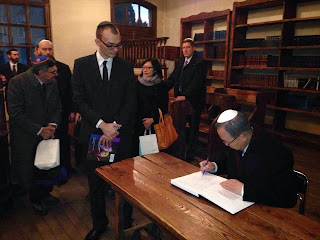 Secretary General Ban’s visit has been noted in the world press, including stories from The Washington Post and Haaretz.


This was the first visit by a UN Secretary General to the Center. He toured the synagogue with Center Educator Maciek Zabierowski and learned about our torah with Rabbi Yehoshua Ellis, the rabbi of Katowice and Upper Silesia. We were proud to host Secretary General Ban and honored by his thoughtful words.