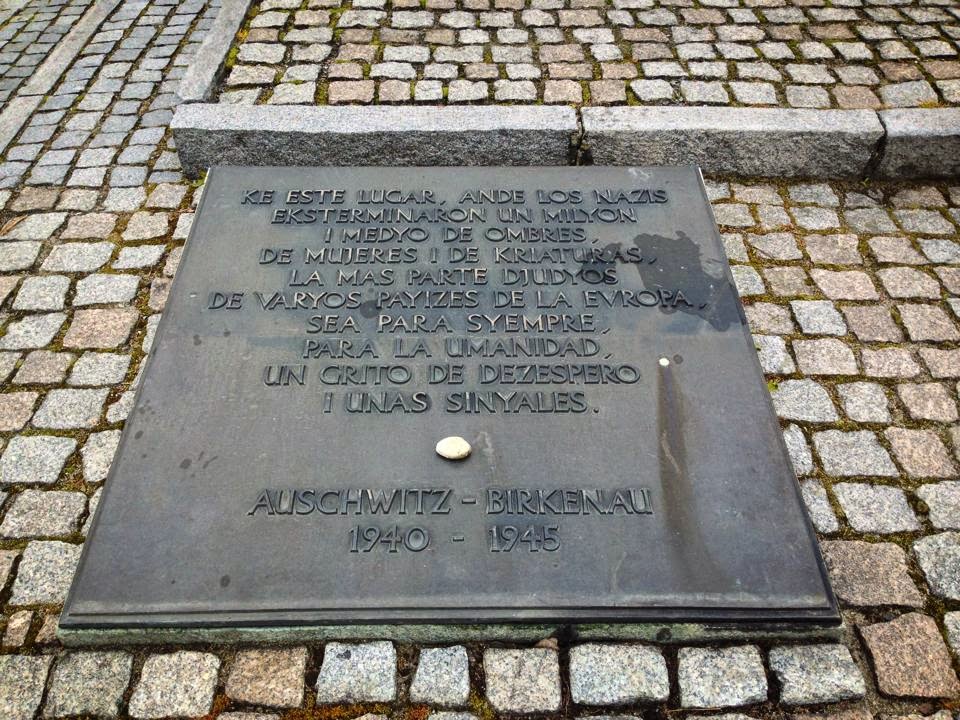 During my very meaningful experience as a participant of the AJC Program for Students Abroad, I felt that personal reflection would provide me with more enriching souvenirs than photos. This photograph, however, is a most significant exception. It depicts one of the many memorial tablets, each of them in a different European language, which are present at the Auschwitz-Birkenau monument.


This Judeo-Spanish-written cenotaph particularly attracted my attention because it was, unlike the tablets written in more common languages, empty of flowers or any other offering left by visitors.

As a Spaniard, I drew an analogy between the bare Judeo-Spanish memorial tablet and the fact that Sephardic language and culture are today virtually extinct, due, in part, to the Holocaust, but also to centuries of persecution in Spain. Laying a little stone on that unadorned tombstone, following the Jewish tradition, was my way of commemorating this immeasurable and irretrievable human loss, as well as paying tribute to those lives not lived.

Pedro Correa Martín-Arroyo is currently a research intern at the NIOD Institute for War, Genocide and Holocaust studies in Amsterdam (The Netherlands). His previous research involved British propaganda in Spain during World War II and the myth of General Franco as ‘Saviour of the Jews’. Starting in October 2014, he will begin a PhD in International History at the London School of Economic (LSE) under the supervision of Professor Paul Preston, which will focus on Jewish refugees and rescue operations in Spain and Portugal during the Holocaust.