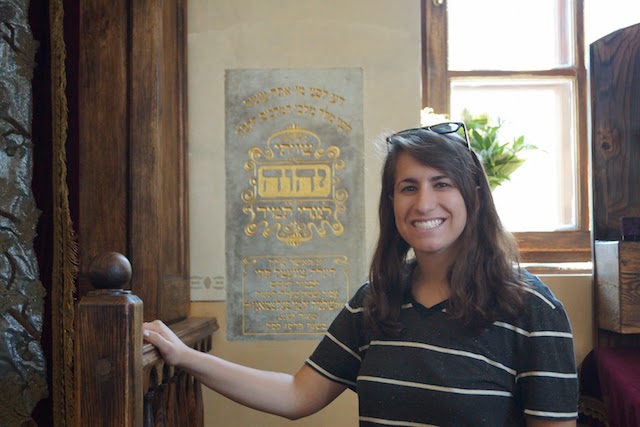 What inspired you to apply to the American Services Academies Program?
During the summer of 2013, I visited the children’s memorial at Yad Vashem during a Birthright trip to Israel. Standing among the stars in the memorial, I had my first memorable experience with the magnitude of the Holocaust’s devastation. However, I felt that until I traveled to Poland, I would not be able to fully comprehend the reality of the camps, gas chambers, and mobile extermination sites, despite the plethora of history books and pictures available. Furthermore, I find Holocaust studies particularly pertinent to military members, especially given the Holocaust’s relative modernity and high military involvement. While the public may utter the words “Never Again,” the responsibility for upholding this promise ultimately falls to people in uniform with the power to back it.

How did the ASAP impact you after you completed the program?
The ASAP made me much more attuned to and intolerant towards discrimination. As a Jewish American and an Arabic speaker, I find myself increasingly defensive of Muslims in our country and around the world, who unfairly and incessantly face accusatory rhetoric. As a military member, I have taken the pledge to advocate for and educate others about equal rights for same-sex couples. Because the ASAP revealed the diversity of the victims attacked during the Holocaust, I began to see dissimilarities between people as insignificant; everyone should have the right to live freely. I noticed that each case of genocide since the Holocaust escalated from an aversion to diversity. Since ASAP, I have included my firsthand stories while coordinating the Naval Academy’s freshmen training at the United States Holocaust Memorial Museum. And I have utilized the experience as a framework for reflection during military training, especially as a plebe summer detailer the month after ASAP concluded.

You were recently awarded the highly competitive Marshall Scholarship. Congratulations! Please tell us a bit about the scholarship and what you’ll do with it?
The Marshall Scholarship is a two-year scholarship that aims to provide future leaders of America the opportunity to study in the UK, to help scholars gain an understanding and appreciation of contemporary Britain, and to motivate scholars to act as ambassadors throughout their lives thus strengthening British-American understanding. Approximately 40 Marshall Scholars are selected each year. I intend to pursue a Master’s in Science & Security from King’s College London during my first year, with a focus on nonproliferation studies and their relevance to the Navy submarine community. My second year is yet to be determined.

What are your future aspirations, and how will your international educational experience affect them?
In May, I will receive my commission as an Ensign in the United States Navy. After graduate school, I will attend Navy Nuclear Power School in Charleston, South Carolina, and then I hope to serve aboard a Virginia class fast-attack submarine. I hope to become one of the first women to command a submarine. During my tours on shore, I want to apply my international educational experience by drafting U.S. policy on international nonproliferation and by serving as a military adviser to some of the top-echelons of U.S. executive decision-makers.

Andrea Howard, of Norcross, Georgia, will graduate from the United States Naval Academy in May 2015 and commission as one of the first one hundred women in the United States Navy’s submarine force. At the Naval Academy, Andrea is a double major in Political Science and Arabic. She serves as the Corps Commander of the 115-member Drum & Bugle Corps, sings alto in the Gospel Choir, and coordinates freshmen training at the United States Holocaust Memorial Museum. Andrea spent a semester in Oman studying Arabic and Arabian Gulf food security strategies, completing independent research as the Naval Academy’s second Trident Scholar from the Humanities Division in the past decade.