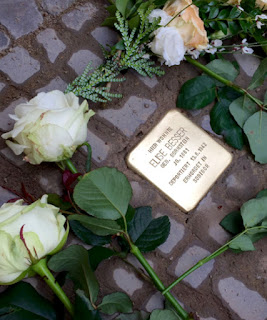 I have always loved flowers. Maybe it is because I am named after a plant, and every nickname I have ever had has been plant-based. Or maybe I just appreciate this marvelous piece of life. So when I arrived at the first site my AJC PSA group visited when touring Birkenau, my initial thought was of how beautiful the field of yellow globe flowers was in the bright sunshine. Seven decades ago, this field was the site of the very first gas chamber in Birkenau.


To visit Auschwitz & Birkenau as a person of Jewish descent is to come face to face with the distinct possibility that you may not exist. My grandparents, who fled from Germany in 1934 to the United States were lucky; my extended family was not. I harbored a lot of anger about the Holocaust and what it did to my family. I decided to participate in the PSA in 2016 to visit these places because I wanted to better understand and honor the unnamed millions representing my family. I expected a country full of death and discovered one full of life.

I grew up Catholic and visited a synagogue only once in my life. Judaism was a part of my identity in name only. So when we went to Shabbat service as part of the program, I had very little idea what to expect. I struck up a conversation with one of the Israeli women sitting next to me and pestered one of the other PSA students with play-by-play questions about what was happening. Two groups of Israeli high schoolers were on their visit to Poland and had crowded the historic Izaak Synagogue to almost bursting.

Then, the singing started. As a Catholic, I spent a huge amount of time in church singing, but it was nothing like this. It began quite calmly, the students singing with as much fervor as you would expect from a bunch of energetic high school students wanting to impress their friends. But as it continued, the singing crescendoed until the synagogue was filled with sound. The students began dancing, first in their place, and then joining into a winding coil around the synagogue, moving to the sound of their prayers. At one point, a man climbed onto the bimah and yelled at the students in Hebrew, “We need to continue on with the service or you will all be sent home!” as they had been repeating the same refrain over and over for ten minutes. It was an incredible experience; people I did not know were singing prayers of a religion I do not follow in a language I do not speak, and yet I felt a sense of community. I also felt a sense of peace – my people had not only survived, but were thriving.

After the five days I spent falling in love with Poland, I left with more questions than I had started with. The most prominent of these was whether or not I could truly claim this experience as my own. My grandparents survived, we did not know any specific relatives who had been murdered by the Nazis, and I did not even follow the religion my people were persecuted for. I was journaling about this in my hotel in Kazimierz on my last night in Poland, when I received an email from my Aunt Olga:

“Dear Family,” it read, “A genealogist and Jewish family researcher in the San Francisco Area has been researching members of the Bornstein/Philippsborn families. A couple of weeks ago she sent me the German translation of a short talk given in Berlin recently. The talk celebrated the dedication of a stolpersteine (commemorative stumbling block) for Elise Bornstein Beset, daughter of Jacobi and Thelka Bornstein, a brother of Philipp Bornstein [my great grandfather].” In the email, she included a photo of the small memorial, the concrete evidence I had been yearning for to understand the feeling of connection I felt to the Shoah as a Jewish person.

The next day, I left to volunteer at the Calais refugee camp in France, hoping to honor the sacrifice my grandparents made for my sake and to bring the refugee experience full circle by helping those who are in need today. The most incredible part of this experience was seeing the community they have built within the confines of a refugee camp, reminding me of the incredible resilience I saw in the Jewish community in Krakow.

There is a special beauty in life continuing where it was once destroyed. It is the beauty I see when I think about what my family and I have because my grandparents left Germany when they did. It is the beauty I saw in the faces of the refugees at the camp in Calais, the hope of a better life shining from their eyes. It is in the overwhelming sense of community I felt watching the Israeli students joyfully dance around the Izaak Synagogue while singing in the language of a people reborn.

As my distant cousin stated at the dedication of my family’s stolpersteine: “There is a Jewish saying that goes: ‘Only those people are dead whom we no longer remember.’ This stone confirms that Elise existed, that she lived here and that at some point was taken away to a concentration camp and killed. I believe Elise would have been comforted to know that she now has eleven relatives who have come after her, some of whom live in Germany again. She will live on in us, and we will never forget her story – and we will continue to tell it.”

Rosemary Bornstein is a student at Saint Louis University, majoring in Public Health, International Studies, and French. She intends to earn Master’s and Doctorate degrees in Public Health with a focus in Communicable Diseases, after which she hopes to work in West Africa to combat Neglected Tropical Diseases. Rosemary intends to spend her life advocating for the treatment and victims of neglected diseases and is passionate about refugee rights. She has lived in five foreign countries and visited more than two-dozen others, documenting her journey here.